GROWTH OF AN INFLUENTIAL LEADER


GROWTH OF AN INFLUENTIAL LEADER 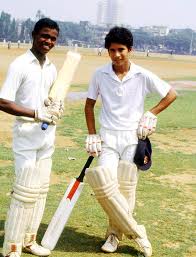 It has been a surreal journey for both the spectators and the man himself. At the age of 10, he marveled at the spell-binding experience of witnessing the underdog Indian team led by Kapil Dev topple the reigning champions and favourites, the West Indies, at the final of the Prudential World Cup at the home of cricket - Lords in England. The dream was seeded and from the age of 11 his love, passion, and commitment to cricket was nurtured within the most cricketous hub of Mumbai. His devotion for the game was fueled when he had his first taste of international cricket when, in 1987, at the age of 14, he was a ball-boy at the World Cup game between India and Zimbabwe. In 1988, he attracted world-wide attention when a 3rd wicket stand of 664 with long term friend, Vinod Kambli, set a world record for any wicket in any class of cricket.

Throughout his career, Tendulkar displayed a sense of groundedness which can be traced to his close family relationships. His father provided the early security, his older brother Ajit recognized  the initial potential and coach Achrekar tended this potential till it blossomed into international quality. Tendulkar was always the faithful, dutiful son; open to being taught as his talent was fashioned and shaped so that the greatness within him could later be manifested.

In 1989 he stepped onto the international scene , mesmerizing audiences from Karachi in Pakistan, Old Trafford in England, Perth in Australia, Johannesburg in South Africa and avid fans back home in India. The boy wonder had arrived and with a tapestry of youthful exuberance, maturity beyond his years, composed temperament and ability to dominate the best bowlers, totally enthralled audiences around the world. He managed to extend his childhood dream far into adulthood, retaining his boyish enthusiasm for the game, honing his skills as he progressed and established heart-felt connection with his ever-increasing multitude of followers both inside and outside of India.

For 24 years, he lived his dream, paid his dues as he maintained a disciplined lifestyle, being diligent in his preparation and displaying a servant attitude towards his country. His stature was established on a lifestyle of distinction and being a model professional for all aspiring young sportspeople.

The retirement of Sachin Tendulkar is an event of epochal proportions for the people of India. His kind of love for the game, his longetivity in the game, his pride in playing for his country; defined him as a sportsperson who surpassed all of his contemporaries. No one has had to shoulder the expectations of a nation for nearly a quater of a century, no one has been the bedrock of a team in such an exceptional manner in a country where the game of cricket has so nearly become a religion, no other single sportsperson has been a model of consistency and stability over such a long period of time amidst a changing sport and changing context.

His stature inside and outside of the game goes beyond hard, cold statistics. It also stems from the respect he garnered from his fellow players which had a lot to do with the way he went about his business; he was temperamentally consistent, his career is devoid of any major controversy, his enthusiasm for the game undiminished

Tendulkar's career coincided with revolutionary changes within the game world wide as well as the rise of Indian cricket. The momentum commenced at the 1983 World Cup and the shift in influence and status in the game moved eastwards in 1996 when Sri Lanka won the World Cup in explosive style.The surprise victory of the 2007 T20 Inaugral World Cup in South Africa by India gave birth to the IPL and with the ICC headquaters moving to  Dubai - the eastwards shift of influence and status from the old- world Lords to the new eastern power bloc was complete.

Tendulkar is well-positioned to impact the world-wide game of cricket. With Mumbai as his base, a 24 year playing career as his point of departure and the most powerful cricketing nation eating out of his hands, Tendulkar is  perfectly positioned  to be a leader of immense influence, a powerful voice whose opinions and perspectives will carry tremendous weight in the corridors of power, not only in India and the game of cricket, but globally and to all sport. Cricket may never produce another Sachin Tendulkar. And perhaps the best is yet to come.