Eldership portrays an image of fatherly concern, benevolent personality and magnanimity of heart. Eldership gestates, emerges, matures and recedes. The world, and South Africans in particular; have been privileged to experience this journey of eldership with Nelson Mandela. With the retirement of Sachin Tendulkar, India may be on the verge of experiencing the emergence of one of it's most influential "younger" elders.

In the last week of October, Cape Town was privileged to host an extraordinary gathering of global leaders called "The Elders" for their biannual meeting. Established as a group by Nelson Mandela in 2007, they are a distinquished group of elderly statesfolk who have held prominent global positions and now possess the integrity, independence, and transparency necessary to combine their wisdom and experience to open up dialogue in seemingly intractable situations. They are demonstrating just how valuable eldership is in our world.

Eldership embodies tough lessons learnt
The emergence of Nelson Mandela from the Victor Verster prison on a hot, sunny afternoon of 11 February 1990 was an event of epic significance. Shrouded in mystery for 27 years, branded a terrorist and communist, he emerged on the world stage ; mature and measured ; a statesman of the highest calibre. His time had come. After 27 years of physical hardship, emotional isolation and constant humiliation, Mandela emerged from apartheid's Alcatraz equipped to offer his country and the world leadership honed on the anvil of adversity. The era of warrior heroism had crucibled into nuanced servant-leadership.The walk was not only long, it was complex; walking out of physical, conceptual and emotional prisons.
Eldership is a function of leadership. It is an earned status acquired through experiences which have been integrated, wisdom earned the hard way, crucibles endured and the valleys and mountain-tops of life conquered. Elders are qualified to operate on a level of leadership which emanates from the integrity of their personhood.

When Sachin Tendulkar burst onto the international scene at the tender age of 16, he captured the imagination of his audiences, his lifestyle was that of the ultimate professional, his character and maturity were being tested and proven under tough circumstances. His achievements are the more remarkable when we consider that he has shouldered the hopes and burdens of a cricketing nation for 24 years.

When interviewed  by Oprah Winfrey in 2001 Nelson Mandela shared these words:

"If I had not been in prison, I would not have been able to achieve the most difficult task in life, and that is changing yourself"

The life and times of Nelson Mandela is woven into the most dramatic tale in South African history; the rise and fall of apartheid. His forceful character, strong sense of destiny and iron will has shaped that story; just as it has shaped him. It was in prison that he learned self control and discipline under under the most harsh conditions. Here he re-defined himself from a freedom fighter to a servant-leader. Here he developed the nuances of a transformational leader so vital in leading his country from the brink of a Bosnian-type civil war to the most miracolous of miracles - a negotiated revolution. In the process he displayed that eldership consists of exceptional leadership.

Sachin Tendulkar holds an unparallelled and unrivalled place in the hearts of the Indian nation. No other sportsperson has achieved near-God status as the "Little Master". Whichever direction he chooses to venture into beyond his playing career, the status of eldership in his country awaits him. His many political accolades and current membership of the political structures of his country ensures the role of eldership. 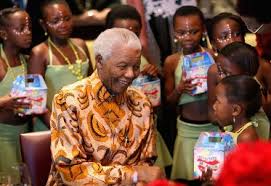 The release of Nelson Mandela  was a huge world story; an event campaigned, crusaded and petitioned for on a worldwide scale. He emerged at a time of extraordinary crossroads in his country, the continent and the world. At the time South Africa was overripe for change. Anchoring and navigating his country through its most intensive period of the deepest possible change required eldership of the highest calibre and Nelson was not found wanting. There were heart-soaring possibilities for South Africa and he led in a manner unparallelled in South African history.

We wish Sachin Tendulkar well for the next chapter of his life.
Posted by Unknown at 09:27 No comments: